Container Mixers (RC) of Reliance are medium intensity mixers primarily used in industries where the dispersion of material and pigments are essential but where an aggressive mix is not necessary. These units are frequently used in the Powder Coating & Color Concentrate Industries.

Reliance’s Container Mixer Hoppers are specifically designed to aid the mixing process and its Mixer tools are provided with two standard tools. First, the large tool stretches from one end of the mixing head to the other, its primary function is to lift material. Second, the smaller tool is called the chopper tool and is used to fluidize the material. container mixer tools are driven by Variable Frequency Drives to allow for speed control.

The Mixing Head of Reliance’s Container Mixer is designed to provide an airtight seal with the Mixer Container that is supplied with air purge shaft seals and a venting port while Chopper Assemblies can be supplied through the Container Mixer Head for additional shear. Further, Its Nozzles can be added near the discharge for the injection of liquids or gas during the mixing process that can be used for inverting the mixer as in the case of metallic bonding or chemical reaction rich processes. 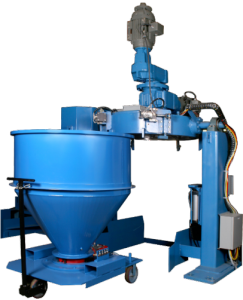